Last week, I had the pleasure of listening to an interesting talk by Michael Lach of the Center for Elementary Mathematics and Science Education at the University of Chicago. Michael did a very nice job of describing the national picture in mathematics and science education and in relating that picture to efforts localized in Delaware. But, one strong point that Michael made stuck with me above all the rest. He simply said “This is different.”

Michael, of course, was referring to the CCSSM. If you’ve read the standards, you know that they make the point about being different quite forcefully.

These Standards are not intended to be new names for old ways of doing business. They are a call to take the next step.

The first I’ll call “No floor, no ceiling.” Often, you hear those in the math education world talking about tasks that are “Low floor, high ceiling.” I’d like to argue that mathematical modeling projects are even more wide-open than “low floor, high ceiling” tasks and that this should be exciting both for teachers and for students. Of course, it could be terrifying! It could induce in you the kind of vertigo I feel when I see this picture: 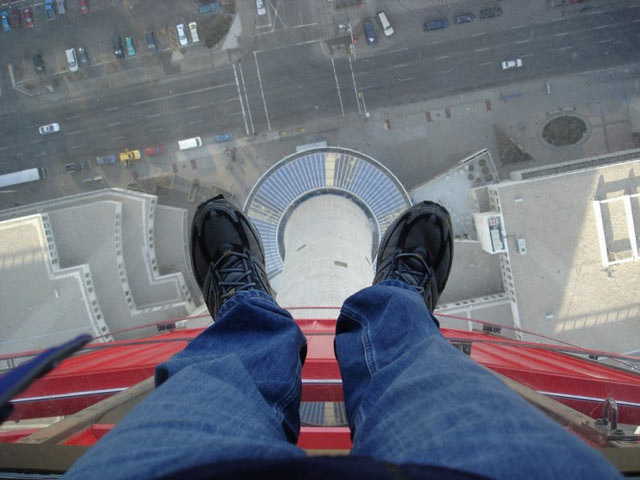 But, hopefully you’ll find it more invigorating than terrifying. So, why do I argue that mathematical modeling activities are inherently “No floor, no ceiling”? Let’s think about the floor first. Any genuine mathematical modeling activity starts in the real world. It starts with observation of some pattern or phenomenon. While teasing out a viable modeling problem from this observation takes some skill and guidance, the observation itself makes the starting point wide-open to anyone. Pollution in a lake, tipping buckets of water, the spread of a disease through a population, or the motion of a projectile are all things to which students can easily relate. They have different levels of familiarity with any of these, but a simple picture or video gives them all an immediate way into the discussion. This is part of what the fact that modeling activities are “open” implies. They’re open in the sense of not being well-defined, yes, but they are also open in the sense of at least the start of the discussion being readily accessible to anybody. Modeling activities help us introduce students to phenomena in the real world that are objects worthy of scientific investigation. At the same time, I’d argue that in addition to being open good, modeling activities are also inviting. Not only are they “no floor,” but there is also a big neon sign saying “Come on in!” right at the front. And, once you’re in, there is virtually an unlimited number of ways to proceed, things to investigate, and avenues to explore.

At the same time, modeling activities are also inherently “no ceiling.” A model is always provisional and can always be improved. This is just plain built in to the iterative nature of the modeling process and in fact, into the nature of scientific investigation. No scientist views their mathematical model as being “done.” They might view it as “good enough for now” or “I’ve taken it as far as I can go,” but there is always that very real sense that there is more to be learned, more to be investigated, and more to be understood. Okay, the “high ceiling” in “low floor, high ceiling” is usually interpreted as meaning that you’re only limited by the extent of your own mathematical knowledge or abilities. That, of course, is similar in mathematical modeling. But, the reason I’d still argue that modeling activities are “no ceiling” is because you can always learn more about the real world situation, enriching your understanding, and then come back and use your mathematical knowledge (however limited) in new ways. At the same time, as you learn more math, you can also often come back and investigate the real world in new ways. There might be some sort of a ceiling, but but you can certainly keep climbing up in different points in the room.

The second difference that I want to talk about is around assessment. Assessing mathematical modeling activities is different, not straightforward, and we need to do a lot more work to figure out how to do this well. Yet, at the same time, some of these differences are actually opportunities to create a different environment in our classroom. One of the perennial struggles of the math teacher at any level is designing new quizzes and new exams. How many hours have we spent collectively designing new exams solely because we are afraid that last year’s exams might be “out there”? Mathematical modeling creates an opportunity to treat “last year’s work” in a fundamentally different way. Rather than something to be hidden, the work of previous students on a modeling problem can be viewed as something to be shared. When I teach mathematical modeling courses and decide to have students tackle a problem I’ve used before, I give them the final reports prepared by previous students. I treat these as part of the scientific record, just as I would any journal article. This gives me the opportunity to help students read something very relevant with a critical eye. It helps me show them how science builds on past science. It helps me explain that not everything that’s written is right. So, I would argue that even though assessment of mathematical modeling feels like a challenge, there are very real ways to view it as an opportunity.

I imagine that if you are preparing to incorporate mathematical modeling into your classroom, you’re feeling some trepidation. I hope you can take away from this note some really good reasons to approach this with excitement as well.