I couldn’t be in San Francisco last week for the Mathematical Sciences Research Institute’s workshop, “Critical Issues in Mathematics Education 2019,” which focused on mathematical modeling in the K-16 world. Fortunately, we no longer need to wait for proceedings to be published before we can share in such meetings and today, through Twitter, YouTube, and the MSRI website we can follow the discussion quite easily. On Thursday morning, there was an interesting panel discussion featuring Sol Garfunkel, Dan Meyer, Nina Miller, Annalee Salcedo, and Erin Turner that subsequently generated a lot of noise on Twitter and apparently a good deal of discussion at the meeting.

At the center of this noise lies the five minutes of remarks made by Dan Meyer which he has helpfully transcribed in full on his blog. At the start of his blog post Dan refers to the controversy and quotes a follow-up remark by Sol Garfunkel that’s worth repeating here:

So we might as well start this fight right now. I think Dan is completely wrong. The reason we wrote the GAIMME report was to put out a standard definition of modeling. Now you could use another definition. But the definition of mathematical modeling in the report and the one all the people I know who work in the field agree on is that it begins with a real-world problem.

Sol goes on to explain that definitions themselves are neither right nor wrong, they are simply useful or not. Of course, I agree with just about everything Sol said, except the “I think Dan is completely wrong” part. I think that doesn’t go far enough and that we’re better served by borrowing a description from the theoretical physicist Wolfgang Pauli who is said to have remarked upon particularly careless thinking by describing it as “not even wrong.”

Let’s take a look at Dan’s remarks and see if we can understand exactly where he went “not even wrong.” Dan starts out okay with the easy crowd-pleaser of criticizing a textbook problem labeled “CCSS Modeling” that well, clearly isn’t.

It’s worth noting that Dan doesn’t describe why he thinks this particular task isn’t mathematical modeling, but just takes his shot and moves on. One gets a first inkling of the “not even wrong” level of confusion here when one realizes that by Dan’s later definition of modeling, even this example is actually modeling. So, we started by criticizing textbook publishers for “calling any problem modeling for the sake of a good alignment score for their textbook” but later even this example is modeling? What? Okay, this is not going to be easy to untangle.

Dan’s next attack is aimed in a different direction, this time, at the authors of the GAIMME report. He claims that these authors have placed modeling on a mountain “that is far too high for any mortal teacher to climb.” His main critique here seems to be that the report is just too long. Two hundred whole pages! Who could read such a thing!? Forget for a moment the fact that this ignores entirely the “How to use this document” section of the GAIMME report which suggests that readers read the introductory chapter and then skip to the chapter on their grade band of interest, significantly shortening the reading time for any given individual. Instead, think about this claim – a 200 page document is simply too long for any practicing teacher to read in order to learn about a new topic with which they are unfamiliar and which they wish to bring into their classrooms. To me, this shows a stunning lack of respect for teachers as professionals. Dan, I think you could have looked to either your left or right and found teachers like Nina Miller and Annalee Salcedo sitting next to you who clearly would and did read the GAIMME report. I think we need to have more faith in teachers.

But, Dan’s just getting started and next he turns to an argument that looks as if it may actually have substance. He turns to the content of the GAIMME report and claims that it depends heavily on adjectives like “messy,” “open,” “real-world,” and “genuine,” claims that these adjectives have no shared meaning and concludes that the only way to know if something is mathematical modeling or not is to ask an author of the GAIMME report. One has to wonder if he’s actually read the report. On page ten of the GAIMME document we find this nice, succinct, relatively adjective-free definition of mathematical modeling:

Mathematical modeling is a process that uses mathematics to represent, analyze, make predictions or otherwise provide insight into real-world phenomena.

This is a nice definition. It tells us the class of things that mathematical modeling belongs too, namely those we think of as “process,” and tells us the specific difference between the process of mathematical modeling and all other processes. This process is one that uses mathematics in a particular way to uncover things about real-world phenomena. Large chunks of the rest of the document work to unpack and explore this definition and even to provide alternative, equivalent definitions, but I certainly don’t feel that I need to give Sol a call every time I want to check something against this definition. 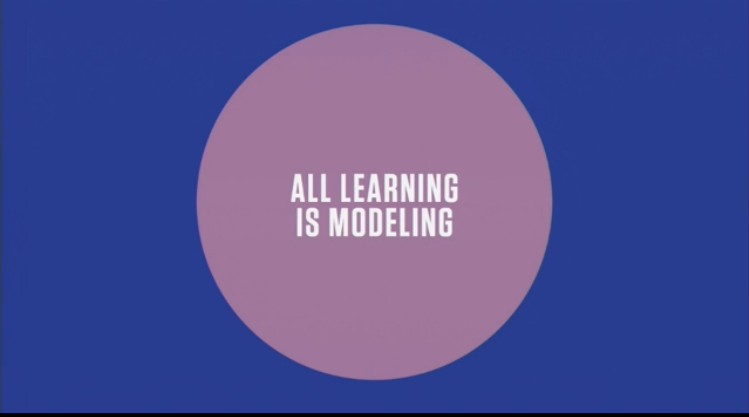 This, of course, is really where Dan has his “not even wrong” moment. By ignoring (ridiculing?) the work that folks like Sol Garfunkel and others have done to attempt to define and explain this absolutely essential mathematical practice that yes, we call “mathematical modeling,” and by replacing it with “all learning is modeling,” Dan unfortunately engages in the worst possible form of equivocation. And, that’s a shame. Dan’s built a following because he’s said a lot of sensible and important things about mathematics teaching and learning. But, this time, he’s taken a wrong turn and gone down a road that I’m afraid leads to a dead-end. Not just for him, but for the students of teachers who follow him down that road. The fact is, mathematical modeling is an essential mathematical practice. It’s one that’s been practiced for hundreds of years. Galileo did it. Newton did it. Einstein did it. And, today, thousands upon thousands of scientists, engineers, mathematicians, economists, social scientists, finance professionals, data scientists, and countless others rely upon this practice to continually push forward our ability to understand the world around us. It’s not a simple practice. It’s harder than guessing the next number in a sequence and it’s different than making conjectures about polygons. But, it’s worthwhile, and I believe, it’s attainable for teachers throughout K-16 and their students. Today, there are more resources available than ever before to help teachers at all levels get started in the classroom. The GAIMME Report is a good start. Sol Garfunkel’s COMAP organization provides multiple such resources including the jointly sponsored Mathematical Modeling Hub. Heck, there are countless blogs like this one and folks across the country and across the K-16 spectrum working to develop new resources and working with teachers to support them in mastering and teaching the essential 21st Century skill of mathematical modeling. So, let’s put aside this “not even wrong” conception that “all learning is modeling” and focus on the real work and the real-world work that remains to be done.