Whenever I’m asked “What’s the most important skill for a mathematical modeler to have?” or “What do you look for in a graduate student?” or “What do you wish every entering university student would have?” my answer is always the same and always one word – curiosity. Now, that could either indicate a stunning lack of imagination on my part or it could indicate that I think this idea of curiosity is pretty important. Today, I’ll try and convince you that it’s the latter of these two, give you an example of what I mean, and along the way, develop some ideas of how to take advantage of some common technology in your classroom.

First, lets talk about this notion of curiosity. In his wonderful book “Curious: The Desire to Know and Why Your Future Depends on It,” Ian Leslie describes two categories of curiosity, distractive curiosity and epistemic curiosity. Distractive curiosity is what keeps us checking email on our phones or refreshing our Twitter feed. It’s the built in craving we all feel for the novel or the new. Easily satisfied, short-lived, and ultimately not very nourishing. Epistemic curiosity is the directed and focused, it’s the form of curiosity that grabs hold of us and and drives us to explore something deeply, with no end in mind, just the desire to really know. When I answer “curiosity” to the inquisitive parent or prospective graduate student, I’m talking about epistemic curiosity, or the unbounded longing to know. I hope you are at least a little convinced that I’m not being lazy in my answers, but rather, can see how a prospective university student, or a graduate student, or any prospective mathematical modeler at any level, would be well-served by having a high level of epistemic curiosity. Maybe next time instead of a one-word answer, I’ll hand the questioner a copy of Leslie’s book.

So, what does this have to do with golf, math, or your classroom? Let me take you along with me on a little investigation into the latest bane of my existence and we’ll explore golf, math, and some ideas for your classroom along the way. As we do so, keep in mind, it’s all driven by curiosity.

As is the case for many occasional golfers, I suffer from the dreaded slice (yes, that’s the latest bane of my existence). The beautiful, satisfying thwack of the ball is spoiled again and again as I watch my initially straightly flying shot arc to the right and end up in the trees or on a good day, the neighboring fairway. Now, a slice is caused by one of two things (or perhaps both), an outside-in swing path or an “open” club-face on contact. I’m fortunate to have golfing buddies who in-between falling over laughing manage to occasionally watch my swing for me and so I’m fairly certain my particular issue is mostly an “open” club face. Striking the ball with an open club face puts a tremendous spin on the ball and quickly the Magnus Effect takes over, causing the curved flight path. In the video below you’ll see a few creative and curious fellows illustrate the Magnus Effect with a basketball and a really high dam.

The Magnus Effect is ultimately an instance of Bernoulli’s Law which you can explore at:

For now, let’s just agree that it would be good if I could put less spin on my golf ball. (But, note how many interesting pathways the curious could follow here!) So, to confirm this “open-club face” hypothesis and to get a handle on just how open it is, I thought it might be useful to be able to video my golf club impacting my ball during my swing. And, this brings me to a neat tool for your classroom – the iPhone 6. Remarkably, the camera on the iPhone 6 is not only of incredible quality, but can do limited high-speed photography as well. To get a grasp on just how cool that is, let me just say that about ten years ago, it cost us more than

10,000 to buy a low-end basic high speed camera for our lab. Yes, that camera could ultimately record much faster, but at an incredibly limited resolution and it’s lower end recording speeds (which were the most useful speeds!) were identical to what the iPhone 6 can now do.

The slow motion setting on the iPhone 6 gives us a frame rate of 240 fps. That is, it will capture 240 frames of video per second. The question then becomes – Is this fast enough to capture my club hitting a ball? Which, of course, brings up the question – How fast is my club head moving when I hit a golf ball? It was at this point in my thinking that I realized I had no idea how fast my club (or any club) was moving. And, this brought to mind the difference between distractive and epistemic curiosity. I could easily Google “How fast does a golf club impact a ball?” I’d get answers that would at least give me a ball park to work in. But, this is where the epistemically curious or the mathematical modeler parts ways with the non-modeler. The mathematical modeler isn’t just seeking an answer, they’re seeking insight. It’s not just a number they want (although that’s part of it), but they want a deeper understanding of whatever it is they are exploring. It’s more work then Googling, but it’s ultimately more valuable as well.

So, let’s do a little quick and dirty mathematical modeling, a “back-of-the-envelope” type analysis. We can get a lower bound on the speed of the club head at impact by idealizing the heck out of the situation. If the lower bound tells us our iPhone 6 can’t capture the impact, then we can move on. If it suggests that it could, we’ll need to improve our model to get a tight lower bound and compare again. We’ll idealize our golfer as a simple pendulum. 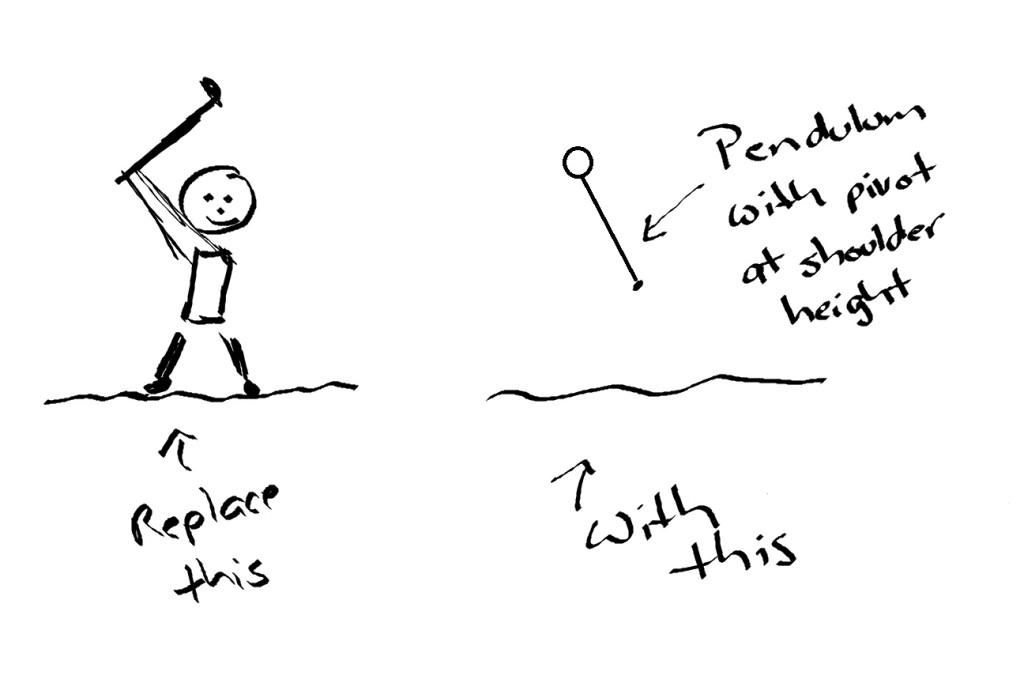 Now, suppose we make the assumption that all a golfer does is act like a pendulum, bringing the club head to the top of the travel path and then releases, letting gravity do the rest. Note, we know this is wrong! We know that we are ignoring everything the golfer does to accelerate the club head. That’s why this is a crude lower bound. With these assumptions, we can however quickly and easily compute a lower bound on club speed by using conservation of energy. All of the potential energy at the top of the swing is converted into kinetic energy at the bottom. That is,

The mass terms cancel, we know the gravitational constant, and if we estimate the initial height of the club head at about 2.5 meters, we get a lower bound for the velocity of our club head of about seven meters per second (15 miles per hour). Those of you who have ever swung a golf club will see instantly that this is very much a crude lower bound. The golfer accelerates the club head through the swing and so we’d expect actual club head speed to be eight or nine times this number. But, we know it should be no slower than this and that’s enough for our calculations today.

So, can our iPhone capture our club head at the moment of contact? To resolve the motion, we can estimate that we’ll need to capture the club head as it moves centimeter by centimeter. If

is our frame rate and

the velocity of the object we want to capture, then the distance the object travels between frames is simply

. Our lower bound on velocity and the known frame rate of 240 fps tells us that our club head is traveling at least 3 centimeters between frames. Knowing that this is a pretty crude lower bound and that the actual club head will be traveling much faster, we can confidently say that it is unlikely that even the really cool iPhone 6 camera will capture this motion. Since it’s always fun (and important) to double-check with reality, here’s a “slo-mo” video of my club hitting a ball.

Sadly, as we predicted, too fast to tell the position of my club face!

But, we’ve discovered a pretty neat new tool that I hope you’ll try out in your classroom. How can you get students playing with “slo-mo,” observing things they haven’t seen before, figuring out how fast things move in the real world, and exploring some cool mathematics along the way? Let us know! Oh, and please don’t take my comments above as being anti-Googling! It’s well worth spending some time poking around on the web searching “math model golf.” You’ll find a lot of neat work that I’m sure will give you other ideas for your classroom. Doug Arnold’s beautiful little paper on “The Science of a Drive” is a great place to start.